Petroleum engineering is a field of engineering concerned with the activities related to the production of hydrocarbons, which can be either crude oil or natural gas. Exploration and Production are deemed to fall within the upstream sector of the oil and gas industry. Exploration, by earth scientists, and petroleum engineering are the oil and gas industry's two main subsurface disciplines, which focus on maximizing economic recovery of hydrocarbons from subsurface reservoirs. Petroleum geology and geophysics focus on provision of a static description of the hydrocarbon reservoir rock, while petroleum engineering focuses on estimation of the recoverable volume of this resource using a detailed understanding of the physical behaviour of oil, water and gas within porous rock at very high pressure. 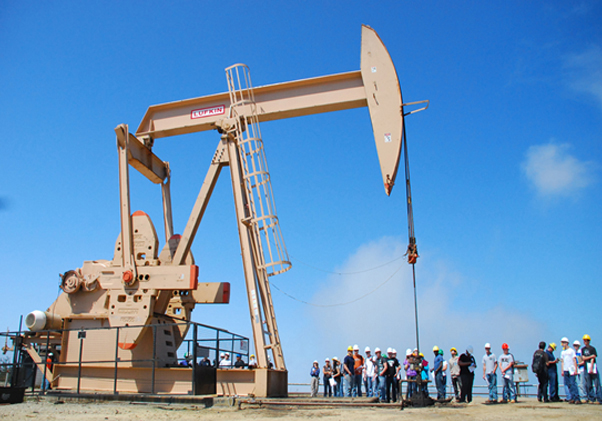 The combined efforts of geologists and petroleum engineers throughout the life of a hydrocarbon accumulation determine the way in which a reservoir is developed and depleted, and usually they have the highest impact on field economics. Petroleum engineering requires a good knowledge of many other related disciplines, such as geophysics, petroleum geology, formation evaluation (well logging), drilling, economics, reservoir simulation, reservoir engineering, well engineering, artificial lift systems, completions and oil and gas facilities engineering.

Recruitment to the industry has historically been from the disciplines of physics, chemical engineering and mining engineering. Subsequent development training has usually been done within oil companies.

The profession got its start in 1914 within the American Institute of Mining, Metallurgical and Petroleum Engineers (AIME). The first Petroleum Engineering degree was conferred in 1915 by the University of Pittsburgh.[1] Since then, the profession has evolved to solve increasingly difficult situations, as much of the "low hanging fruit" of the world's oil fields have been found and depleted. Improvements in computer modelling, materials and the application of statistics, probability analysis, and new technologies like horizontal drilling and enhanced oil recovery, have drastically improved the toolbox of the petroleum engineer in recent decades.

Deep-water, arctic and desert conditions are usually contended with. High Temperature and High Pressure (HTHP) environments have become increasingly commonplace in operations and require the petroleum engineer to be savvy in topics as wide-ranging as thermo-hydraulics, geomechanics, and intelligent systems.

Petroleum engineering has historically been one of the highest paid engineering disciplines, although there is a tendency for mass layoffs when oil prices decline. In a June 4, 2007 article, Forbes.com reported that petroleum engineering was the 24th best paying job in the United States.[2] The 2010 National Association of Colleges and Employers survey showed petroleum engineers as the highest paid 2010 graduates at an average $125,220 annual salary.[3] For individuals with experience, salaries can go from $170,000 to $260,000 annually. They make an average of $112,000 a year and about $53.75 per hour.